From The Viscount Monckton of Brenchley in Copenhagen. © SPPI:

The mountains shall labor, and what will be born? A stupid little mouse. Thanks to hundreds of thousands of US citizens who contacted their elected representatives to protest about the unelected, communistic world government with near-infinite powers of taxation, regulation and intervention that was proposed in early drafts of the Copenhagen Treaty, there is no Copenhagen Treaty. There is not even a Copenhagen Agreement. There is a “Copenhagen Accord”.

The White House spinmeisters spun, and their official press release proclaimed, with more than usual fatuity, that President Obama had “salvaged” a deal at Copenhagen in bilateral talks with China, India, Brazil, and South Africa, which had established a negotiating bloc. 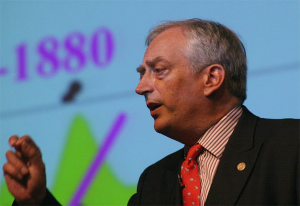 The plainly-declared common position of these four developing nations had been the one beacon of clarity and common sense at the foggy fortnight of posturing and gibbering in the ghastly Copenhagen conference center.

This is what the Forthright Four asked for:

Point 2. No emissions reductions at all unless the West paid for them.

Point 3. No international monitoring of any emissions reductions not paid for by the West.

Point 4. No use of “global warming” as an excuse to impose protectionist trade restrictions on countries that did not cut their carbon emissions.

After President Obama’s dramatic intervention to save the deal, this is what the Forthright Four got:

Point 2. No emissions reductions at all unless the West paid for them.

Point 3. No international monitoring of any emissions reductions not paid for by the West.

Point 4. No use of “global warming” as an excuse to impose protectionist trade restrictions on countries that did not cut their carbon emissions.

Here, in a nutshell – for fortunately nothing larger is needed – are the main points of the ”Copenhagen Accord”:

Main points: In the Copenhagen Accord, which is operational immediately, the parties“underline that climate change is one of the greatest challenges of our time”; emphasize their “strong political will to urgently combat climate change”; recognize “the scientific view that the increase in global temperature should be below 2 C°” and perhaps below 1.5 C°; aspire to “cooperate in achieving the peaking of global and national emissions as soon as possible”; acknowledge that eradicating poverty is the “overriding priority of developing countries”; and accept the need to help vulnerable countries – especially the least developed nations, small-island states, and Africa – to adapt to climate change.

New bureaucracies and funding: Under the supervision of a “High-Level Panel”, developed countries will give up to $30 billion for 2010-12, aiming for $100 billion by 2020, in “scaled up, new and additional, predictable and adequate funding” to developing countries via a “Copenhagen Green Fund”. A “Technology Mechanism” will “accelerate technology development and transfer” to developing countries.

And that’s it. Expensive, yes. Unnecessary, yes. But earth-shaking? No.

The disconnect between the gaseous halations of various grandstanding “world leaders” about the supposedly urgent need to “Save The Planet Now” and the puny outcome of the Copenhagen Non-Event is dazzling. And it is welcome.

For all the rhetoric – or the flatulence that passes for rhetoric these days – it has begun to dawn on the “leaders” of those nations that subject them to regular recall and re-election that the people no longer believe the mad scientists are telling them the truth. And the people are right.

What is more, after the failure of the mainstream news media to report what the malevolent and unpleasant scientists involved in the Climategate affair had written to one another about those with whom they disagreed, or about what they had done to invent, fabricate, contrive, fiddle, tweak, alter, massage, conceal, hide or even destroy scientific data for the sake of protecting and peddling the pseudo-science in which environment correspondents had so readily and so ignorantly believed, the people no longer trust the media.

And that is bad news for a governing class that has come to develop a far-too-cosy relationship with the mainstream media. It is also very bad news for the mainstream media themselves, which are now rapidly losing circulation and ad revenue as the people rightly desert them for the Internet, where – notwithstanding various expensive attempts by the over-funded international Left to interfere with Google and Yahoo searches – the truth is still available if you know where to look.

Copenhagen was the last-chance saloon not for the planet, which does not need saving, but for the UN’s world-government wannabes. They blew it, big-time, by believing their own overspun propaganda about planetary peril and thinking they had “world leaders” where they wanted them. They overreached themselves, and have paid the price.

Even though next year is an el Nino year accompanied by fast-recovering solar activity, 2010 may not, after all, set a new global-temperature record to overtop that which was set in 1998, the year of the Great el Nino. By the time the next yackfest takes place in Mexico City in December 2010, the steam will have gone out of the “global warming” scare. We should not let our guard down, but Copenhagen is more than the end of the beginning for Green fascism: it is the beginning of the end. The eco-Nazis’ attempt at global bureaucratic coup d’etat has failed, and no such attempt is likely to succeed again. Too many of you are watching.

N.R: Thank you, Lord Monckton, for permission to post this article.

This website uses cookies to improve your experience while you navigate through the website. Out of these, the cookies that are categorized as necessary are stored on your browser as they are essential for the working of basic functionalities of the website. We also use third-party cookies that help us analyze and understand how you use this website. These cookies will be stored in your browser only with your consent. You also have the option to opt-out of these cookies. But opting out of some of these cookies may affect your browsing experience.
Necesarias Siempre activado

Any cookies that may not be particularly necessary for the website to function and is used specifically to collect user personal data via analytics, ads, other embedded contents are termed as non-necessary cookies. It is mandatory to procure user consent prior to running these cookies on your website.